Shane Liddelow, PhD, did his postdoctoral fellow in the lab of Ben Barres at Stanford University where his research focused on astrocytes, the major glial subtype in the brain. He discovered a close association between astrocytes, microglia (the resident immune cells of the brain), and abnormal neuron function. His most recent research showed that one form of reactive astrocyte is induced by factors released by microglia. These reactive astrocytes release a toxic factor that kills specific subtypes of neurons and are present in brains of patients with Alzheimer’s, Parkinson’s, Huntington’s disease, and Amyotrophic Lateral Sclerosis (Lou Gehrig’s disease), as well as in Multiple Sclerosis.

Prof. Liddelow’s work focuses on the mechanisms that induce different forms of reactive astrocytes, and how these reactive cells interact with other cells in the CNS in a positive or negative way. By using molecular biology, single cell and tissue sequencing, cell culture and animal models, they can replicate astrocytes in disease to investigate changes in their normal function.

For an introduction to astrocytes watch this video from Neuro Transmissions…

The following has been paraphrased from an interview with Prof. Shane Liddelow on April 10th, 2018.

Do human astrocytes differ significantly from those of other animals? How much of a factor would you say they are in making us uniquely human?

I think it is quite remarkable how similar astrocytes are in shape and function across species. However, there are differences, recent work has shown that as evolutionary complexity increases, and we go from invertebrates to rodents to primates and then finally humans, there is an increase in the size and complexity of astrocytes. If you look at a human astrocyte it will be way more complex than a mouse astrocyte, similar to a tree in the winter with small, bare branches compared to a big, majestic tree in the full bloom of summer. Also, if you look at gene expression of astrocytes, there are subtle differences between ours and that of a mouse. But, the most striking difference is that we have many more astrocytes in our brains than any other species. Flies and worms have many more neurons than astrocytes, whereas humans actually have more astrocytes than neurons. All of these factors probably play a role in making us uniquely human.

Astrocytes are incredibly diverse with a wide array of functions, does it make sense to classify them all as the same type of cell?

I guess it is part of human nature, we like to put things in nice boxes so we can understand and classify what is going on, it is a problem of the human mind. But the idea of heterogeneity has been around for a long time, you can look at the drawing of Ramon Y Cajal (considered the father of modern neuroscience) from the late 1800’s and see astrocytes with broadly different shapes. However, the differences in their shapes gives us no idea if there are differences in their function. There is work going on now looking into this question, but it is difficult to answer. Unlike neurons that use regular action potentials (the ‘firing’ of electrical signals between neurons) to communicate with other neurons, which we can easily measure, astrocytes use these slow waves of calcium ions to communicate. However, early work is coming out now showing differences in various brain regions of the flow of these calcium ions. Another key measure of astrocytes is how many synapses each one has as that lets us know how many different neurons they are in contact with. In the hippocampus one astrocyte might have 50,000 synapses whereas an astrocyte in the striatum may have 90,000. We are just in the infancy of sorting all this out.

You found that a specific type of astrocyte, called A1 reactive astrocytes, contributes to the death of neurons in neurodegenerative disorders. Can you give a brief overview of this and talk about the challenges in developing a treatments to stop this from happening?

I think it is important to first go back a bit and talk about the cells that make up the brain. The first cell you think about is a neuron, and if you stopped most people on the street they would probably know that neurons send electrical signals that allow us to think and feel and talk etc. But they are less than half the total number of cells in the brain, and they are unable to function without the wide menagerie of other cells. There are blood vessels that bring nutrients in and remove waste, pericytes that support the blood brain barrier and control blood flow, and many kinds of glial cells, among which are oligodendrocites that wrap around the long projections from neurons and enable the transport of electrical signals.

Then there are astrocytes, which are also a type of glial cell. At least half of the brain is astrocytes and they have a wide range of important functions: during development they secrete factors that enable neurons to connect and become functional, they help send signals from one neuron to another, they provide nutrients to neurons, they take away waste products, and more. 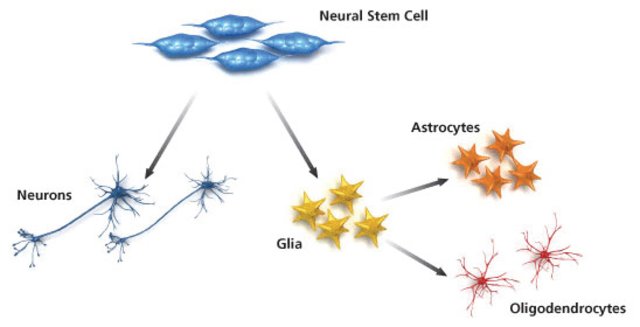 But I am more interested in what goes wrong. One of the first events when we have brain injury is the recruitment of reactive astocytes to the affected area. For the longest time people believed that astrocytes were all the same, but recently we learned that there are at least two forms of these reactive astrocytes, called A1 and A2, that activate to different types of injury. We think that A1 respond to inflammation by destroying nearby cells, and that A2 react to ischemia or stroke by repairing damage.

The final piece of the brain puzzle, to put this all together, is microglia, the immune cells of the brain. They respond very quickly to injury, infection or disease by releasing a whole host of factors that recruit A1 reactive astrocytes to the target area, which then start to clean up the damage. They strip away synapses between neurons, stop them from making new synapses, and they release toxins which harm nearby cells. What I think is most interesting is they don’t attack everything, they selectively target subsets of neurons that are related to specific neurodegenerative diseases. No matter which disease we look at, we only find these astrocytes in the degenerating region of the brain, because of that we think that these A1 reactive astrocytes are actually driving the death of neurons. We don’t know why, we are trying to learn more about the basic biology so we can develop effective treatments that target this.

What level of understanding would be good enough to move forward with a treatment?

Well first, academically, there is a lot left for us to learn and we could spend decades and billions of dollars uncovering new pathways and really getting to the bottom of this. But, we also have some FDA approved drugs that target some of the pathways we already know about, we may be able to re-purpose those drugs and fast track them as therapies to target these reactive astrocytes. They may not be perfect, but they may help some patients in the short term. That is what we do in my lab, we look for immediate opportunities that could have some benefit, while developing potential future therapies.

The late pioneer of this field, Prof. Ben Barres, believed that these reactive astrocytes are part of an immune response to ward off infection, do you share his belief and how much harm would we be doing if we developed a treatment to turn this off?

From when I was in Prof. Barres lab as a trainee, one of the original thoughts that we had was that because these astrocytes were activated by microglia and responding in the lab to stimulation from bacteria, we might be able to target the bacterial cells that kick off this process. But we were unable to do so, though that does not mean it is not possible and we are still investigating this.

Another alternative is that they are responding to parasitic or viral infection, there is some compelling evidence for this from studies in reactions to West Nile infection where it was shown that the virus recruited these astrocytes that were driving the death of neurons. But, I have to keep saying, we are only starting to scratch the surface on this.

Do we have any tools for measuring the health of astrocytes in a living person or are any being developed?

There are some tools available that can see reactive cells in the brain, the problem is that the fidelity of the current PET ligands (radioactive tracers used in imaging) is quite poor. That is not to say that they are useless, they can detect astrocytes and microglia together, in both resting and in activated states, but not in isolation and not in different kinds of activated states. We are working to develop better imaging techniques to be able to detect only A1 reactive astrocytes, the hope would then be to use this to detect the onset of disease years before symptoms emerge and develop treatments to hold off the damage caused by these astrocytes to keep patients healthier for longer.

You stated: “A provocative question raised by recent studies revealing the existence of A1 reactive astrocytes after injury or in disease is why the CNS would ever produce a neurotoxic, ‘‘harmful’’ astrocyte. One possibility is that these toxic reactive astrocytes are only targeting neurons injured beyond repair: those neurons with excessive damage or dysfunctional firing that could be of major detriment to the neural network as a whole.”

My question is, just how complex is the decision making process that these astrocytes engage in? Is it all just a reaction to cues from their environment or might there be some ‘thought’ that goes into this?

This is probably one of the things that I think about more than anything else and something that I discuss frequently with my colleagues. It comes down to this question, why, evolutionary, would we have kept a toxic cell capable of driving neurodegeneration? We hypothesize that these neurons are only targeting damaged or dysfunctional neurons and that by doing so they might be protecting the overall function of the brain. This machinery was probably put in place by evolution to ward of bacteria and parasites in the brain so they don’t do too much damage, but now that we are living longer lives, this same mechanism is being used against us. We do have some data now to suggest that there are some specific cues in the environment that they are reacting to, and the really good news is that we are starting to learn how to develop therapies to change that or to protect neurons from this.

What excites you most about the future of your field?

We are really excited to learn why we have these astrocytes and we are looking into what happens if we stop this reaction. Will the neurons still function properly? Could we see a beneficial response? Could it be a new way of targeting neurodegenerative diseases?

One other thing these A1 reactive astrocytes do is dampen the excitatory signals of neurons. This could be helpful in diseases like schizophrenia where there is too much excitatory action happening. Perhaps we could enlist these astrocytes to help quiet brain functions.

Like I said, we are just starting to scratch the surface in our understanding of these astrocytes. We are excited to learn more and discover new ways that we may be able to use these cells to stomp out disease while revealing more about who we are.

Click here to learn more about the work of Prof. Shane Liddelow