Andrew Ng (founding lead of the Google Brain team, former director of the Stanford Artificial Intelligence Laboratory, and now overall lead of Baidu’s AI team) in an article at the Harvard Business Review points out that if executives had a better understanding of what machine learning is already capable of, millions of people would be out of a job today. “Many executives ask me what artificial intelligence can do. They want to know how it will disrupt their industry and how they can use it to reinvent their own companies…the biggest harm that AI is likely to do to individuals in the short term is job displacement, as the amount of work we can automate with AI is vastly bigger than before.”

How much bigger? A report from Mckinsey says that 51% of economic activity could be automated by existing technology.

This is not a new phenomenon, new technologies have always displaced the need for human labor. In the past the change was gradual and people had time to learn new skills that the economy needed. But the pace at which it is happening this time may be too rapid for people to adapt.

This is not some issue that you will have to figure out how to deal with in the distant future, it is already happening, relatively quietly, all around us. Somewhere, in a giant tech company or tiny start up, there is someone trying to figure out how to get a computer to do your job better than you ever could.

Below is a handy graph from McKinsey of a variety of skills that can be replaced by AI and the industries that will be most effected. For a more detailed visualization click here and here. 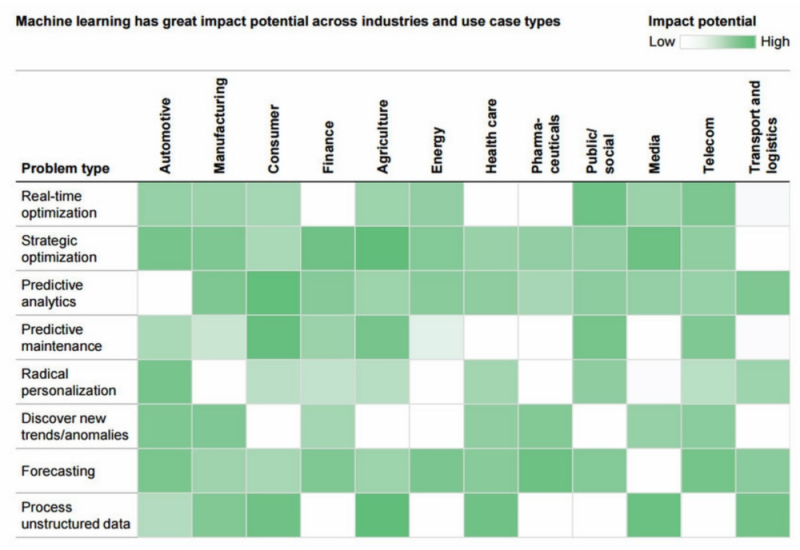 Its impact is already being felt from manufacturing jobs in China to insurance claim workers in Japan to top hedge fund managers in America. And this is just the beginning, as AI develops and its array of skills grow, more and more people whose jobs revolve around those skills will be replaced.

Of course, just because the technical ability is there doesn’t mean it can be implemented right away. Still, this is an issue that should be getting a lot more attention than it does because it will impact you.

For more watch this excellent talk delivered by Robert Reich, Secretary of Labor under Bill Clinton, delivered at Google a week ago. He highlights what will be the pressing need of our times, for people to be able to find fulfillment outside of their job…